Press here to e-mail us 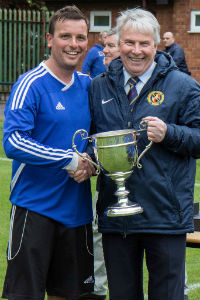 A first half goal from Jason Batchelor was enough for Sportsman to win the prestigious Birmingham County FA Sunday Vase in a historic all-Beacon League final at County Headquarters.

Sportsman toppled nearest rivals and league champions Cottage Spring Castle to finally claim their first cup final success at the fifth time of asking, with the retiring Batchelor the hero of the day.

Man of the match Chris Brown was first to test Jack Hayfield in the Cottage Spring goal and at the other end the lively Mark Edwards fired a free kick over before dragging another shot wide of the goal.

The only goal of the game arrived after 25 minutes, Brown rifled in a thirty yard free kick which deflected off Chris Hunter and the ball fell invitingly for Batchelor who steered it home.

The champions looked for a way back into the match and thought that they had won a penalty when skipper James Cooper appeared to be tripped in the box but referee Dean Steatham waved away the claims.

The second half continued at a frenetic pace with Hayfield making fine saves from Leon Brown, brother Chris and Batchelor, whilst Mat Horton was inches away from forcing home number two. Cottage Spring looked for a way back into the match with the clock ticking down. The tricky Ryan Winwood fizzed in a right wing cross that was met by the head of Dean Lacey but his effort sailed agonisingly over the crossbar.

There was still time for one last chance to force extra time but Cooper's goal bound effort in added time was spectacularly cleared off the line by Horton to the relief of his team mates. The final whistle signalled scenes of jubilation for Sportsman's players and supporters with captain Chris Hunter lifting the coveted prize.